The fire is crackling and you huddle close to it on a cold Edinburgh morning. Next to you, you hear the scratch of a quill pen as your mother writes a letter and the clink of a silver spoon in a cup as your sister makes tea. Perhaps you’ve got a book in your lap – one of the many being published in Edinburgh these days, a city steeped in Enlightenment thinking. Perhaps it’s a riveting historical novel by Walter Scott. Or maybe you’re not reading at all but doing some needlework, or studying one of the globes – the terrestrial one, perhaps, that shows the ever-changing map of the world: when new discoveries are made, they will be papered over the old ones.

These are the sorts of scenes I like to imagine when I’m volunteering at The Georgian House. I was so delighted to return last week to my volunteer job, as a historical guide at the recreated late-18th century townhouse here in Edinburgh. It was wonderful to be in the house again and, especially, to welcome visitors. As you know from reading this blog, I love chatting with people about daily life in the 18th century  and last week was no different. I had several fascinating conversations with visitors about what sort of pets they might have had in Georgian times, what kind of books they read, and how they drank their tea. People, I think, love to zoom in on these little details – it’s why I love ‘social history’ so much. Learning about dates and about big political movements is, of course, very important – but I usually want to know what people had for breakfast.

A couple of months back, I told you that I’d planned to write a series of blog posts focusing on different rooms within The Georgian House and explaining what they were each used for. I even published the first post: ‘Inside a Georgian Drawing Room.’ Now that the house is opened back up again for visitors, I thought it would be a great time to resume the series and to go room by room, showing you some of my favorite objects in each. I’ll also talk a little bit about what people living and working in an upscale Georgian townhouse would have done in each room.

This week – I wanted to show you the parlor.

The Parlor at The Georgian House in Edinburgh

A parlor is like a family sitting room. It’s a living room, basically, in contrast to the more formal, grand drawing room that I talked about in my other post. This is where the family would relax and pursue hobbies, like in that scene I described above. They might write letters, read books or the newspaper, or have friends over for tea.

Afternoon tea was a popular activity and there was a lot of ceremony attached to it. It was one of the ‘polite accomplishments’ of young women to be able to blend a good cup of tea (green or black or a mix) for her guests. Tea was taxed in this period (we know all about that in America, right? The colonists weren’t too happy about it! See: the Boston Tea Party. I can definitely do a post on what exactly the ‘Boston Tea Party’ was, and what led up to it, if you’re curious). Since it was so expensive, it was kept under lock and key in caddies or drawers.

The table all set up for tea – note the tall, almost trophy-looking thing which was the ‘water urn’. That’s where they kept the hot water. It held a piece of iron inside that was heated on the fire and then inserted inside, to keep the water hot.

Kids were also allowed in the parlor and would have spent time with their parents in this room. Their mom might have taught all her children the basics of reading and writing, but of course education was then rapidly split based on gender. While both elite boys and girls would have things like music and dance lessons, boys would also learn about history, geography, languages (like Latin), and philosophy. They could go to a university and study law, medicine, theology etc. Girls, on the other hand, were taught domestic things  to prepare them to be wives (how to be a good host, how to sew, how to deal with servants and with basic household budgets maybe). We’re talking about elite women and men here, the wealthiest members of society.

These diverse educations were so that they prepared men and women to enter what was believed to be their sphere: for boys, that was the public sphere. For girls: the private, domestic one. (This distinction is crucial, I think, to understanding why, for instance, women had such trouble securing the right to vote many decades later. The public, political sphere was thought to be a man’s domain. So when he voted, he was voting for the entire household, in theory. Yes, this way of thinking is repressive, of course. But that’s how it was. In general, people were not given equal access to education, not just based on gender, but also race and class).

In addition to receiving an education in this room, kids (and adults) might also have played games. There’s a chess board on display and a popular game for kids was ‘ball and cup’ (which is where you try to get a ball…into a cup. But trust me, it’s harder than it sounds!). 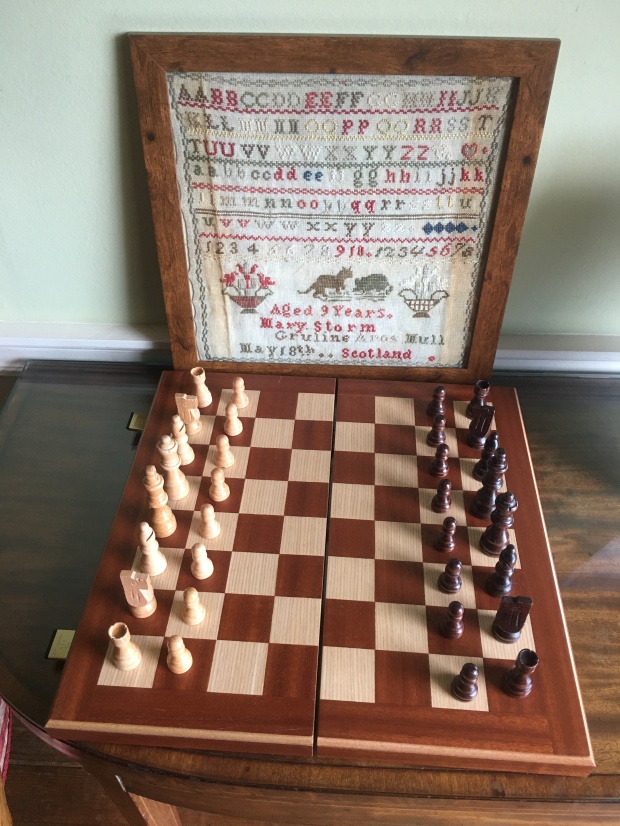 A chess board from the period and, above that, a little girl’s ‘sampler’. Samplers were common in this period and they were places where young girls would practice their stitching and their alphabet. Parents really did put them on display like this, to show what their daughter had made and how accomplished their little girl was.

In our parlor, we also have two globes on display: celestial (mapping the heavens) and terrestrial (mapping the land). The Georgians loved symmetry and it was very in vogue to have not one but two globes on display, if you could afford it. Not just to show off, but also, you know, symmetry. The globes at The Georgian House are from 1810. As I mentioned earlier, globes were constantly being updated, as new landmasses were being ‘discovered’ and added to the map, and as boundaries of nations changed. So sometimes it’s difficult for us to date globes accurately, because they were re-papered to be kept up to date.

The Terrestrial Globe at The Georgian House

There are so many things to see in the parlor alone, and many of them I’ve not mentioned here! If you’re curious to see more, please do come and visit us at The Georgian House. I work every other Saturday (and will be there this weekend, September 26th) if you’d like to come and say hi! They’re operating at reduced hours and there’s a pre-booking system in place – you can book your tickets to visit here!

In the upcoming weeks I’ll be focusing on other rooms – including the kitchen and the bedroom – so if there are any specific things you’re curious about, in terms of those rooms, let me know and I can try to highlight them in those posts.

14 thoughts on “Madeira Mondays: A Visit to a Georgian Parlor”