Last week, I received two very good pieces of news. One I cannot talk about publicly yet (ohhhh secret!) but the other I can happily announce is that I have a new poetry book coming out! My second poetry pamphlet will be published later this year with Scottish indie press, Stewed Rhubarb. They specialize in publishing spoken word poetry and as a spoken word poet myself, it was the perfect fit! The book has poems about early American history, about sex, about literature…basically, all the stuff I’m interested in! (Can you tell I’m excited?). I can’t wait to work with Stewed Rhubarb, and with my fabulous editor Katie Ailes, on this book and I’ll share lots more info. when we’re closer to publication day.

But I wanted to celebrate the publication news this week by making an 18th century drink. Since it was a chilly February day, I chose a warm drink called ‘Flip’. I’m not going to include the full recipe here because (spoiler alert) I found this drink pretty vile, BUT I will tell you what it is, how I made it, and here’s a link to an excellent video with step-by-step instructions of how you can make it too, if it seems like your sort of thing (It was definitely not mine!). Jas Townsend, the re-enactor who makes it in the video, seems to really enjoy his though so…maybe it just wasn’t for me?

Flip is a hot, frothy drink that is a blend of ale, rum, some sort of sweetener (molasses or sugar) and sometimes eggs and cream. It’s also usually spiced with nutmeg and/or ginger, and it was very popular in 18th century America. It popped up in American taverns in the 1690’s and was still popular during the Revolutionary War. Food writer Corin Hirsch, in the book quoted above, found one instance of a tavern in Holden, Massachusetts, who charged more during the Revolutionary War for their Flip than they did for a bed. A mug of ‘New England Flip’ was 9 Dollars, versus a bed in the common boarding room for women, 2 shillings! Either those sleeping arrangements were really bad, or their flip was really good, or both.

How do you make it?

I have to admit that making Flip was kind of fun because you are meant to pour the drink between two separate pitchers until it is blended. So I mixed an egg and some spices in one bowl, then heated up some ale separately, and then added them together in these two pitchers – pouring back and forth until it was creamy.

The two pitchers I used to make my (pretty dreadful) ‘Flip’

Pouring the mixture from one pitcher to another to mix it. (Even the flowers in this picture look sad. They probably don’t like Flip either!)

I was vaguely following along with the Townsend video linked above and also there’s a recipe for it in Forgotten Drinks of Colonial New England. In any case, the resulting mixture was creamy-ish, but there were itty bitty chunks of cooked egg inside it, which I suppose I could have strained out. But I also did not like the smell of it: the hot, yeasty smell of the beer, mixed with the nutmeg and ginger, mixed with the egg.

But I think where I really went wrong is that in the 18th century Flip was heated up a second time (after you’d mixed the drink) by plunging a hot fire poker into the middle of it. The poker heated it (of course), but also added burnt flavors. I would imagine this might work better than what I did, which was put the whole thing back on the stovetop briefly, once I’d mixed it all together, just to get it warm again. By not using an actual fire poker, you lose some of that fire flavor, which was probably part of what made the drink special.

Not nice, you guys.

Even though I drank it from a fantastic Bernie Sanders ‘Feel the Bern’ mug, that was not enough to save this drink from tasting really, really bad to me. 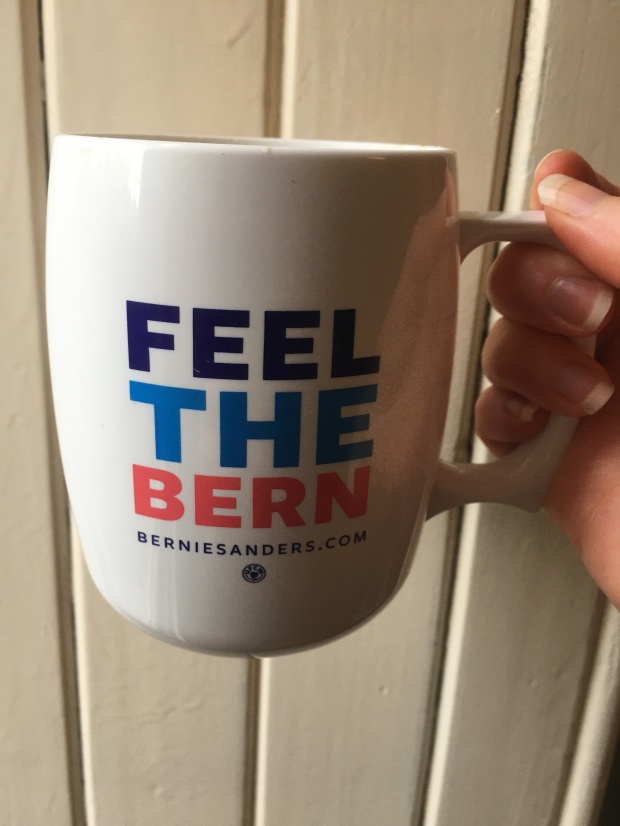 For one thing, it was pretty sweet. I tasted the sugar definitely and also rum has its own sweetness…all of that together made for a thick, HEAVY, brownish drink that actually turned my stomach.

Looking back on it, I’m not really sure why I picked Flip in the first place, other than the fact that it looked fun to pour the drink between the two pitchers. I’m not a beer drinker, and I don’t love rum, so I’m not sure why I thought I would enjoy those two things heated up and mixed together with an egg. I would still try it again if someone else made it who knew what they were doing, but I think this experiment was probably doomed from the outset!

Nevertheless, I am glad that I tried it, because now I will know what it is if I ever run across it in a historical source. And my stomach will turn at the memory of making this forgotten concoction from the 18th century. Which I will not be resurrecting again any time soon!

For an 18th century drink that I definitely did enjoy, check out my recipe for whipped syllabub!