Today I wanted to share with you a super simple recipe for potato pancakes from the 18th century which I discovered on the brilliant YouTube channel Townsends, where they recreate 18th century recipes. As the host John Townsend says in his introduction to this recipe:

Potatoes were an important part of the diet of the 18th century in Great Britain and in North America. They were important especially for the poorer sort of folks who didn’t have those expensive foods available.

The recipe Townsend uses is originally from 1732 and, as he mentions in the video, it was a recipe you might use if you were eating a lot of potatoes and wanted to vary up how you cooked them. Or if you had old potatoes lying around. Or if wheat was too expensive. Apparently this recipe shows up in lots of different cookbooks of the time (he quotes from Primitive Cookery from 1767, which was a recipe book filled with inexpensive recipes).

Like everyone else, I’ve been in quarantine and thought now would be the perfect time to give this super affordable and tasty looking recipe a go!

These potato pancakes were a moderate success (I’ll tell you more on that below), but, for now, let’s get into how I made these. This is my version of the recipe, inspired by the 18th century recipe I mentioned above and from Townsend’s video. Enjoy!

And that’s it. If you think it sounds like we’re making mashed potatoes, you’re pretty much right!

How to make them

Step 1: Peel the potatoes and cut into bite-sized pieces.

Step 2: Boil the potato pieces for about 15 minutes or until they’re tender. Then drain and let them cool.

Step 4: Add a big pinch of salt and a splash of milk (maybe like 1/4 cup or a teeny bit more, depending on how many potatoes you have). NB Don’t put too much milk here. You want the potatoes to retain a doughy consistency and if you add too much milk, they’re gonna be too runny).

Step 5: Add butter to a hot pan (like you’d do for typical pancakes) 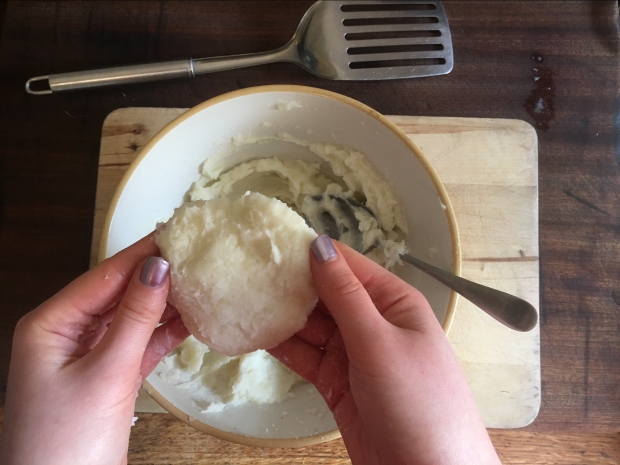 Step 7: Then put them into the pan. Flip them like pancakes after a minute or two on each side. They should be golden brown.

And that’s it! Serve hot.

As you can see, they turned out pretty well in the end! They were a bit like hash browns, only more compact. We ate them with mustard, which wasn’t especially period appropriate for a poorer sort of 18th century person’s diet, but it was delicious. You could of course have them with ketchup. Or any sort of dipping sauce. I really wanted to try eating them with apple sauce and I realized that was because they reminded me a bit of latkes which I always ate with apple sauce at a friend’s for Hanukkah.

So the trickiest thing about cooking this, we found, was trying to keep the potatoes together when they were frying in the pan. Now, I grew up in the USA and I’ve had some experience flipping good ol’ American style breakfast pancakes, so I didn’t have as much trouble with this. But if you’re not as used to flipping pancakes, it might take some practice. I’d say: don’t flip too soon. And it’s a process of trial and error (our first few were definitely the messiest).

The real problem is that they don’t have flour to keep them all stuck together and make a heartier dough. But that was ‘authentic’ to the recipe, which was eaten by folks who would have made cakes like these if flour wasn’t something that they could afford. This is not like the sweet, rich and decadent syllabub recipe I made. This is hearty, simple food that will fill you up.

For me, these pancakes were, overall, pretty good. But my partner seemed to really enjoy them. So they’re worth trying out one afternoon if you fancy it and definitely let me know if you do!