What was the disease? Who were the major players trying to combat and contain it? And how did it change the city afterwards? END_OF_DOCUMENT_TOKEN_TO_BE_REPLACED

Ever since Covid-19 broke out across the world, there’s been a lot of talk about the Spanish Flu pandemic of 1918. I’ve also heard historians, especially medievalists, called upon to talk about the bubonic plague of the 1300’s, and I’ve seen Daniel Defoe’s 1722 book, A Journal of the Plague Year, added to many people’s reading lists! All of this makes sense. People are curious about pandemics of the past and how people coped (spiritually, physically, psychologically) with rampant infectious diseases.

That curiosity is what drove me to read Fever, 1793 by Laurie Halse Anderson. This is a YA (Young Adult) novel published originally twenty years ago, but it definitely has a lot of relevance today. It’s about an epidemic that you may not have heard of: the outbreak of yellow fever in Philadelphia in 1793. END_OF_DOCUMENT_TOKEN_TO_BE_REPLACED

I have wanted to visit the Museum of the American Revolution ever since I saw this CBS special about it. The museum opened very recently (2017) and last month, during my first ever visit to Philadelphia, I finally managed to stop in and see it for myself! 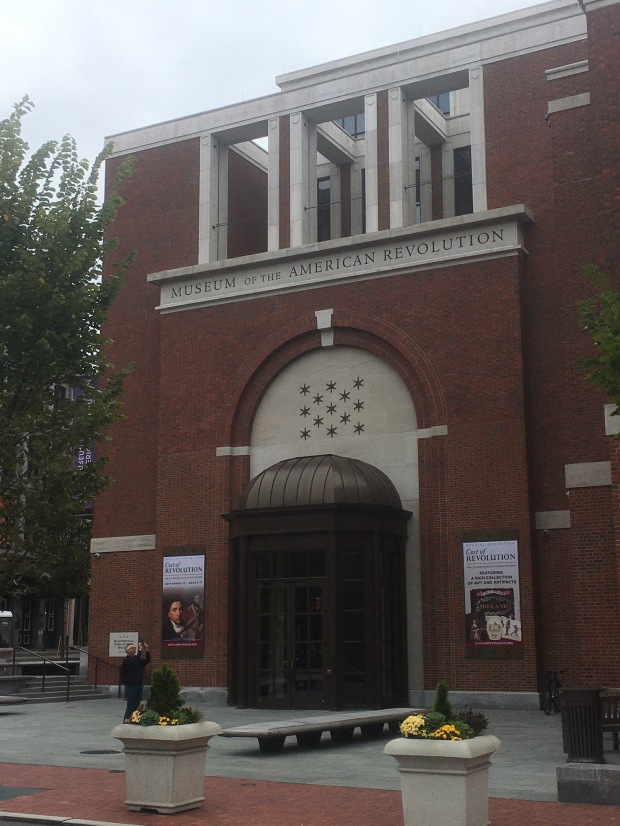 It’s an enormous undertaking, trying to present the entire Revolutionary War (plus its lead up and its aftermath) to visitors. Some of those visitors (like myself) might know a fair amount about this period already, but some might be learning about it for the first time. From the look of it during my visit, it seems to be a popular place to take school groups, but it’s also right by Independence Hall and all the other major Revolutionary War sites in Philly so I imagine it attracts all sorts of tourists and visitors, both local and international. Overall I think the museum does a really great job of presenting the war from various different perspectives (political, racial, geographical, etc.) and conveying that this was a complex conflict and not matter of ‘good guys’ and ‘bad guys’. I actually heard one of the tour guides saying to a group of what looked like eight or nine-year-old school kids, ‘Now what did I say at the beginning of the tour? The Revolution was nuanced.’ Even using the word nuanced with kids of that age made me smile and made it clear just how committed the museum was to trying to tell a multifaceted a story of the Revolution. 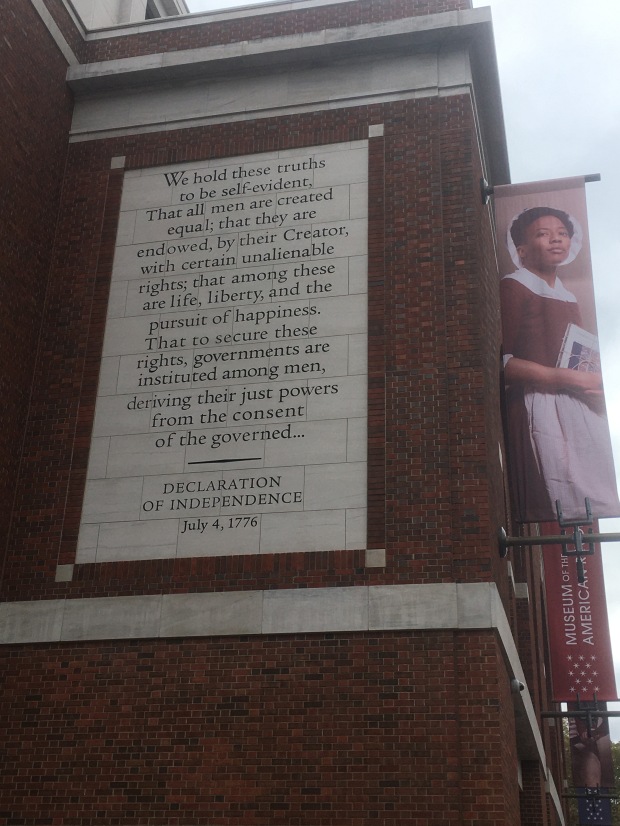 Of course the Revolutionary War was experienced differently by everyone who was alive during that time, but I think they did a relatively good job of exploring some underrepresented perspectives that I certainly wasn’t taught at school: the dilemmas of the people of the Iroquois nations deciding which side of the conflict to align themselves with, for instance. There is also some exploration of how many enslaved men ran away to join the British army in exchange for their freedom. 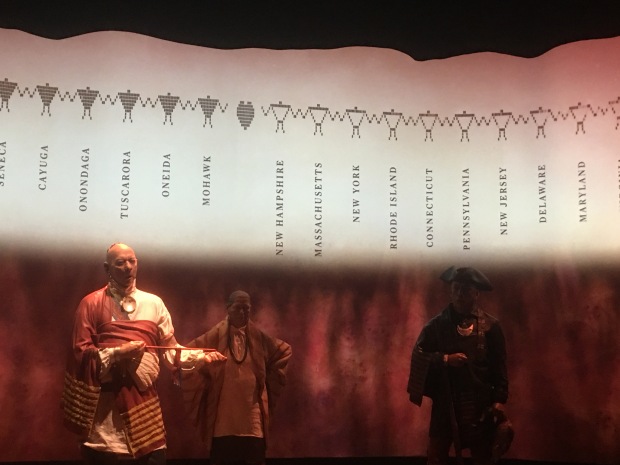 Overall it is a very battle centered museum – the rooms are basically arranged to explore chronologically the different military campaigns. Since I’m more interested in social history (a fancy way of saying ‘how people lived’) and day to day life for women at home during this period, it didn’t appeal to me as much. But I also recognize that those are my particular interests. The Revolutionary war was a war, after all, so I imagine many people are primarily curious about the different battles and military engagements. It’s just not my cup of tea.

That being said, there was still lots for me to see and enjoy there. Here are a couple of things that stood out to me as particular favorites from my visit.

Phillis Wheatley book: They had a signed first edition of the first published book of poetry written by an African American woman, Phillis Wheatley. Wheatley is a fascinating historical figure in American history and literature (a blog post about her is forthcoming!). She was born in West Africa, but forced into slavery as a child and transported to North America. She learned to read and write from the Boston family she served and ended up becoming a famous, celebrated poet in her day.

George III statue fragments: The book that I’m working on is set in colonial New York, so it was really cool to see two original fragments of the statue of King George III that was pulled down in NYC on July 9, 1776. I also learned that based on the fragments, it’s been concluded that the statue featured George III in a Roman-style toga, which I had not known before and actually impacted a scene in my book! (Fun fact: Most of the lead from the statue was melted down into musket balls by the Continental army during the war).

Toy broom and toy platter: I liked seeing the itty-bitty toys excavated from British Revolutionary Campsites around New York City, reminders that the children of British soldiers were going around with the army in North America. I’ve never seen little pewter toys like this before and it was a charming sight.

‘Women’s Property and War’ display: Something that a lot of people don’t know is that after the Revolution, there were ‘confiscation’ laws passed and the new government started seizing the property of those who had remained loyal to the King. A lot of my PhD was looking at the experiences of women in South Carolina who suffered during and after the war because of their husbands’ politics and who lost their property due to these laws. This display featured furniture pieces similar to the furniture that was confiscated from the Drinker family (Philadelphia Quakers who tried to remain neutral during the war). I’ve read Elizabeth Drinker’s diary, and obviously have a lot of personal interest in this topic, so I was happy to see this particular display, although I would have been happy with even more about it.

Tea: I’m a big fan of incorporating multisensory displays at museums and there was a box where you could smell one of the varieties of tea that was thrown into the Boston Harbor during the tea party. (It was black and green tea thrown overboard). 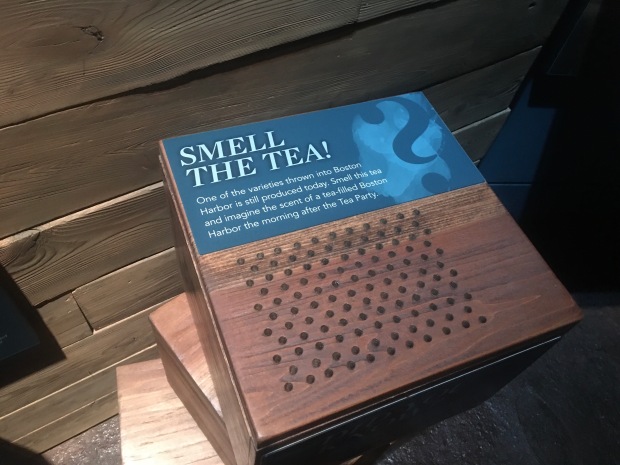 The mirrors at the end: When you’re leaving the exhibition there’s a big mirror and it says ‘Meet the future of the American Revolution’ at the top. It’s a very sweet visual reminder of our connection with the past and I really like the idea of school kids peering up at themselves and seeing themselves as part of this story. (Did I tear up a bit? Yes. Yes I did).

So overall it was absolutely worth a visit and if you’re in Philly you could quite easily tie it in with a visit to Independence Hall and the Liberty Bell. You’ll leave with a really clear sense of what led to the Revolutionary War, as well as the key moments and battles. There’s also a rotating exhibition on the ground floor, so do have a look at what is on there when you visit.

Thanks for reading and I hope that it’s helpful for anyone considering a visit! Museums like this always make me think of the tremendous challenge of communicating such a sprawling conflict to people and this museum did a good job. And let me know, if you’ve been already, what you thought of the Museum of the American Revolution – I’d be very curious.

See you next Monday!

‘Madeira Mondays’ is a series of blog posts exploring Early American history and historical fiction. I’m not a historian, but an author and poet who is endlessly fascinated by this time period. I am also currently writing/researching a novel set during the American Revolution and recently finished a Doctorate of Fine Art looking at how creative writers access America’s eighteenth-century past. Follow the blog for a new post every Monday and any questions or suggestions feel free to get in touch.