Many of America’s most famous poets lived during the 19th century: Emily Dickinson (1830-1886), Edgar Allan Poe (1809-1849), and Walt Whitman (1819-1892), for example. But there was already a literary tradition beginning to blossom in America in the 18th century as well and one of the literary darlings of colonial America, celebrated both nationally and internationally, was Phillis Wheatley (1753-1784).

Phillis Wheatley rose to prominence as a popular poet in early America, despite the fact that she was a woman, an African-American and a slave. Phillis Wheatley had a remarkable and in many ways quite a tragic life. She’s not a figure that I know a lot about, but I’ve always been curious to learn more, especially since I saw a first edition of one of her books at the Museum of the American Revolution last year. So, in honor of her upcoming birthday – May 8, 1753 – I’ve done a little bit of research into her life and writings, so that I could introduce you (or perhaps re-introduce you!) to this important figure in American literature. 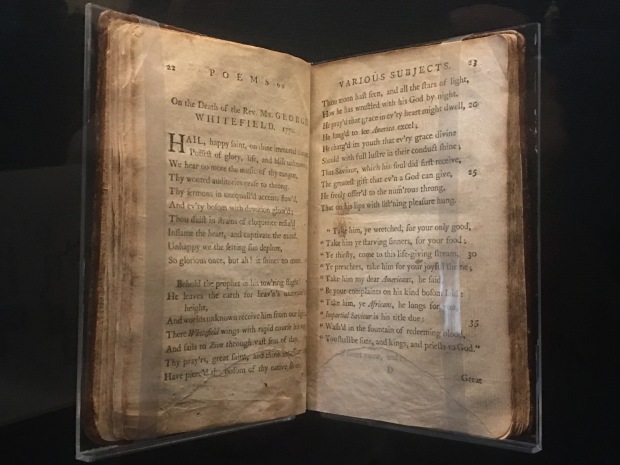 Phillis Wheatley’s book, Poems on Various Subjects, Religious and Moral, published in 1773. I took this photo during a trip to the Museum of the American Revolution in Philadelphia last autumn.

Born in 1753, Wheatley was kidnaped from her home in West Africa at a young age, brought to America and sold into slavery to the Wheatley family. The Wheatleys, noticing that she was very bright, taught her to read and write. Sondra A. O’Neale of Emory University writes, in her short biography of Phillis Wheatley on The Poetry Foundation’s website, about Phillis’ classical education at the Wheatley house:

Soon (Phillis Wheatley) was immersed in the Bible, astronomy, geography, history, British literature (…) and the Greek and Latin classics of Virgil, Ovid , Terence, and Homer. In “To the University of Cambridge in New England” (probably the first poem she wrote but not published until 1773), Wheatley indicated that despite this exposure, rich and unusual for an American slave, her spirit yearned for the intellectual challenge of a more academic atmosphere.

Shortly after that, she travelled to London, where she was welcomed by prominent artists and dignitaries. Her book was published soon after: Poems on Various Subjects, Religious and Moral (1773), the first volume of poetry by an African American.

What did she write about?

Her poetry is very 18th century in its style, for sure. She writes in rhyming couples mostly, with a lot of allusions to classical themes and literature. A lot of her poems were celebratory of America and America’s victory over Great Britain in the Revolutionary War. In 1776, she wrote a letter and poem in support of George Washington, and he replied with an invitation to visit him (he was in Massachusetts at the time), saying that he would be ‘happy to see a person so favored by the muses.’

She also comments on slavery from a Christian perspective in her poem: ‘On Being Brought from Africa to America’. In the same article by Sondra A. O’Neale I quoted from above, O’Neale talks about Wheatley’s influence on fledgling abolitionist movements of the 18th century: ‘Wheatley was the abolitionists’ illustrative testimony that blacks could be both artistic and intellectual (…) her achievements a catalyst for the fledgling antislavery movement.’

What happened to Wheatley?

She was eventually freed from slavery in the mid 1770’s.

She was so incredibly young when she became famous and unfortunately some difficult years lay ahead of her, despite her connections to the rich and famous of her time. She married a free black man who ran a grocery store and experienced years of poverty during the Revolutionary War. She had been struggling with poor health all her life and died at the age of just 31.

So had you heard of Phillis Wheatley before? If you grew up in the USA, did you study her in schools? I never did, which seems a shame because she was one of the country’s earliest poets and has such a unique personal history.

As an American poet myself and someone who loves 18th century history, it was fascinating for me to learn a bit more about who she was and I hope you found it interesting too! I definitely plan on reading more about her in the future. 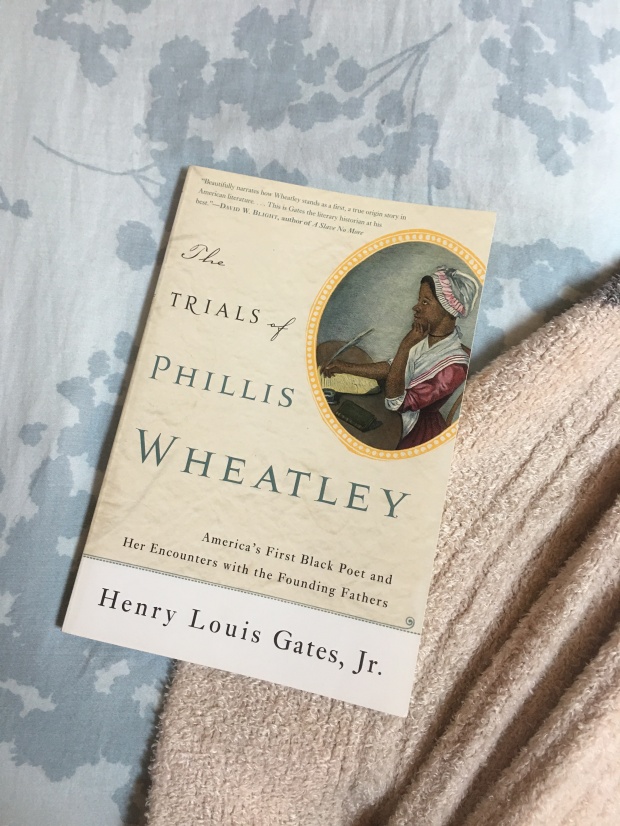 7 thoughts on “Madeira Mondays: The Poetry of Phillis Wheatley”