France, 1770. A tale of forbidden love, same-sex desire and painting. Sign me up! From the moment a friend of mine sent me the trailer for Céline Sciamma’s new film, Portrait of a Lady on Fire (or Portrait de la Jeune Fille En Feu, in its original French), I knew I would enjoy this movie. It ticks so many boxes of things I enjoy. It’s historical, it’s a bit gothic, it’s about female experiences and patriarchal limitations. I’m also a sucker for art about art. So I went into it with pretty high expectations. But what I did not expect was just how good this film was: it’s a subtle, sensuous, and frankly pretty faultless movie. It’s also just so. darn. romantic. And tragic. But we’ll get to that in a second. 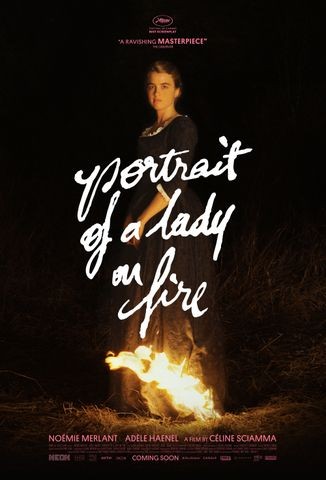 As I mentioned, the film takes place in France in the 1770’s (which, by the way, is the exact same time period in which the novel I am working on is set – so I loved seeing the costumes in this!). It follows a small cast of characters. Marianne (Noémie Merlant) is a painter, newly arrived to a drafty old mansion on the Brittany coast. She has been called there to paint Héloise (Adèle Haenel), a young aristocratic woman who will soon be married off to a Milanese nobleman. The painting will be a gift to this man, a lovely portrait of his new French bride. The only catch is: Héloise doesn’t want to have her portrait painted at all. She doesn’t want to be married off, either. So Marianne must paint her subject in secret, observing her with furtive glances on their walks on a windswept beach, or by the steep cliffs. Is there tension? You bet there is! Are those pauses pregnant with longing and unspoken words? You bet they are.

This is a film that is especially suited to its medium and by that I mean it’s a very visual film. Don’t get me wrong: the dialogue, when it happens, is excellent. Funny and specific and gives a great sense of character. But it’s a lot about looks, as slowly Marianne’s portrait of the surly but also surpassingly sweet Héloise emerges. But Héloise is also looking back at Marianne, observing this young woman who, unlike herself, has a professional career as a painter and has decided not to marry. Marianne wears masculine clothes and smokes a pipe (although this is not entirely uncommon for women of the time). Marianne is well-travelled. She’s heard symphonies. Héloise is entranced. They’re entranced with each other.

I don’t think it’s giving too much away to say that these two fall in love (it’s made obvious in the trailer). At its heart, this film is a love story. But what I like most about the film is that we are made constantly aware – through their romance, through Marianne’s career (which is limited due to her sex), and through a sub-plot with Sophie (Luàna Bajrami), Héloise’s servant who falls pregnant on accident – that their lives are governed by patriarchal rules. Marianne casually mentions that she cannot draw nude male models, only female ones, because female artists are not allowed to observe naked men. ‘Is it a matter of modesty?’ Héloise asks. Marianne replies: ‘It’s mostly to prevent us from doing great art. Without any notion of male anatomy, the major subjects escape us.’

This is great. Sciamma doesn’t have to make Marianne say: ‘We’re oppressed! We’re women! It’s an unequal society!’ We just know from these examples.

I don’t want to come down too hard on Greta Gerwig’s recent adaptation of Little Women, which I liked for certain reasons, but it’s also concerned with limitations faced by women of the past, when trying to enter the public, professional world. And it definitely hits you over the head with these sorts of inequalities more overtly than Portrait does. Think of the speech that progressive artist Jo March makes in Gerwig’s Little Women:

This is a good speech and delivered exceptionally well by Saoirse Ronan, but all of those same sentiments were encapsulated in Portrait, without needing to be directly said. This film is subtle and understated in all of the ways that I felt Little Women was not. And, granted, Little Women was a much cheerier, lighter, brighter, film overall. Whereas Portrait is more turbulent, moody, subtler, holds a lot more back. (Little Women is an American film, after all, and Portrait is a French one haha!). But still. They came out at almost the same time and explore many of the same themes, which is why I’m comparing them.

ANYWAYS, if you like these types of stories (about women who are ‘ahead of their time’, about forbidden passions, about slightly creepy mansions on windswept coasts), then you’re gonna LOVE Portrait of a Lady on Fire. While Portrait didn’t blow my mind – I don’t think it was doing anything exceptionally innovative or treading on especially new territory – I still think it was an excellent film. I cried several times. It’s also definitely one of the best films I’ve ever seen set during this time period, so if you’re looking for a brilliant, subtle, well-crafted historical film, then do check it out!

(PS All of the images in this post, including the gorgeous waves-crashing Featured Image, were accessed via IMDB)

6 thoughts on “Madeira Mondays: Portrait of a Lady on Fire (Film Review)”