What if Sherlock Holmes boarded a 17th century ship? What if, on this ship, there was a series of dark and unexplained happenings: animals slaughtered, strange marks appearing, and, eventually, people murdered. How would Holmes go about solving these crimes and unmasking, as it were, the ‘devil’ lurking in the ‘dark water’?

While Stuart Turton’s novel, The Devil and the Dark Water, of course doesn’t actually feature Sherlock Holmes, it’s obvious that’s what he’s referencing with his central character of Samuel Pipps (who calls himself a ‘problematary’ because, as Turton clearly knows, the whole concept of ‘detective’ wasn’t around in the 17th century, when this book is set). Pipps, and the other characters in the novel, use deductive reasoning to solve the mysterious murders happening on their ship, as it travels from Batavia (present day Jakarta), in the Dutch East Indies, back to Amsterdam. They follow clues, they speak and think very much like Holmes himself.

But, for me, this was one of the issues I had with this novel. The solving of crimes through rational thinking and a genius detective just feels so incredibly Victorian  to me, and at odds with the 17th century setting. When I think of detectives like this, I think of the Victorian era. And it was not just Conan Doyle’s Sherlock Holmes, but also Edgar Allan Poe before him. In 1841, Poe introduced the world to Dupin, a detective who solved crimes through his ‘analysis’ and his superior intellect. “Where was the detective story until Poe breathed the breath of life into it?” Conan Doyle wrote. 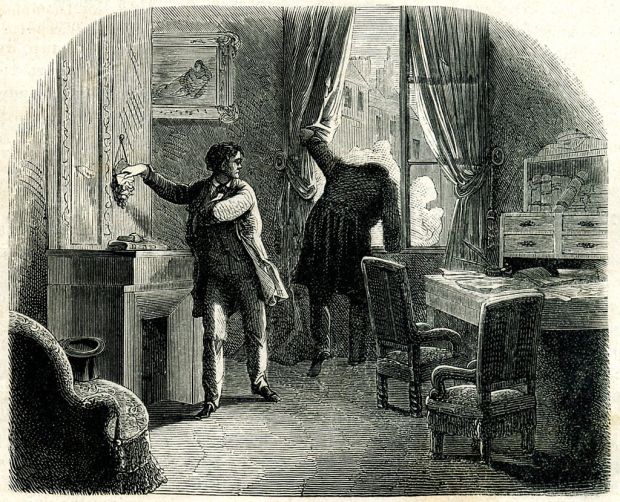 An illustration for Poe’s The Purloined Letter from 1864, image from Wikipedia

And, of course, it’s not just a coincidence that these types of stories came into being and were popular at a certain point in history. There are so many theories and ideas about why Victorians liked crime and detective stories so much. Perhaps it was simply the idea that science and intellect could triumph which appealed to Victorian audiences. This was, after all, a time of great innovation and scientific advancement. As this article from The Smithsonian notes, detective stories appealed to the hopes of people at the time, a time of huge industrial change, but also spoke to their fears:

‘nineteenth century anxieties about the Industrial Revolution and new ways of living supported the idea that evil was anonymous and everywhere. These two instincts—”faith in reason and mistrust of appearance”—are what made Victorians love detective stories, a love that endures today.’

Gruesome crimes also served as entertainment both in fiction and in real life, as discussed in this article by Judith Flanders on The British Library’s website.

Basically, what I’m trying to say is that Sherlock Holmes, and his counterparts like Dupin, were a 19th century thing – sprung from the imagination of that time period. It felt very strange to me that Turton would choose to pluck that style out of its context and plug it into a 17th century one. It’s a mash-up for sure, but it felt incongruous, rather than harmonious, for me. But I tried to have an open mind and go along with this premise – a 19th century Holmes-like hero in a 17th century world. 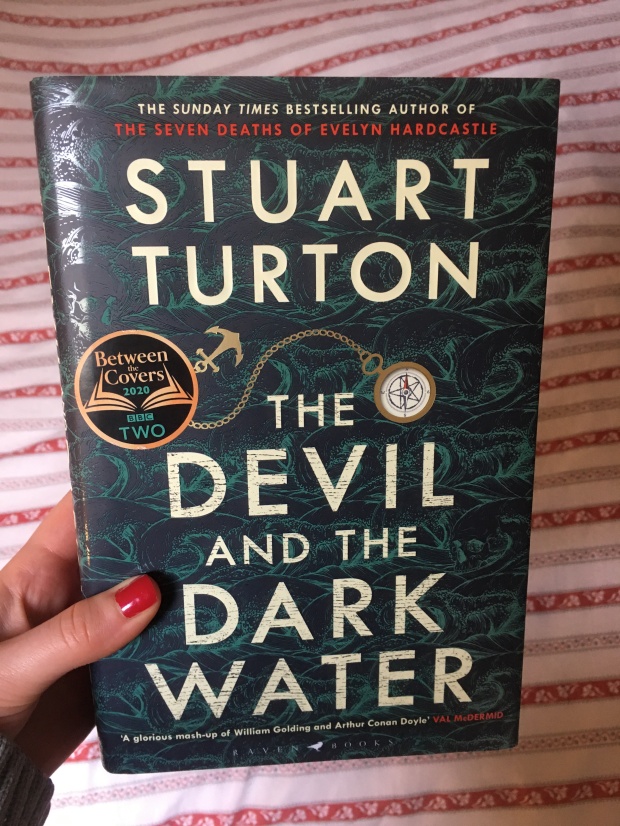 And, at the end of the day, The Devil and the Dark Water was a fun book to read. And what’s really what it wants to be. It’s quite a chunky volume, which at first irritated me – for someone who loves Victorian novels like myself, I have a surprising and irrational dislike for most chunky books, which I usually feel are too baggy and could be cut down. Yet, I never felt like it dragged. The size felt fitting to the scope of the book, which features a huge cast of characters, all with elaborate backstories. The plot moved along at a quick pace: with our protagonists Arent (Pipps’ loyal bodyguard) and Sara Wessel (wife to the governor general aboard the ship) working together with Pipps to solve the mysterious crimes.

It was fast-paced, it was enjoyable, it was the sort of thing you’d read curled up by the fire (and I did) and be constantly turning the pages to see what happens next.

BUT, if you love history, and if part of the reason you read historical fiction is to get a window into another world, then be forewarned: this might not be the book for you. Turton’s characters speak like they’re from our time, saying things to each other like, ‘Okay’ (I was stunned! ‘Okay’ wasn’t used until much, much later). And women complain about their dresses not having pockets (Again, I was stunned! Pockets were a separate piece of clothing that women tied on below their gown, see image here).

And yes, Turton does have a brief ‘Apology to History. And Boats’ at the end of the book where he explains, in a rather affable way, that he ‘tossed overboard’ a lot of historical details that didn’t serve his story. One example that he cites is that he shrunk the crew size to keep the plot easier to follow. Sure, I’ll buy that. Things do have to be tweaked and changed to tell a story.

But I don’t see how details like the pockets thing would have hindered his narrative? For me, these details could have quite possibly enhanced the story and the sense of time and place. His note struck me as a bit insincere: it seemed, to me, that he didn’t want to do the research, not that he did all of the research and then chucked away the bits that ‘hindered (his) story’. But perhaps I’m wrong!

The final reason that I can’t heartily recommend the book is the uneven quality of the writing. This also surprised me, given that I’d seen it lauded several places as being very well written. And overall it was, but one aspect that was a constant distraction was the dialogue tags. Instead of using simply ‘he said’ ‘she said’, or the occasional alternative like ‘exclaimed’ etc. Turton uses all sorts of words I found distracting and totally unnecessary. Take this exchange from p. 263 of the hardcover edition. It reads:

‘What if the case changes your gait and people notice?’ fretted Lia.

‘My gait is not what the men of this ship have been noticing.’

‘Creesjie,’ interjected Sara. ‘Just walk across the room one more time, please. Let me see her.’

That passage is directly taken from the book. Those sentences came one after the other. Fretted, wheedled, warned, pleaded, interjected. I wasn’t paying attention to what was actually going on by the end of this exchange because I was too distracted by the word wheedled. I honestly didn’t know what it meant!

This type of ineffective writing really disappointed me, because often Turton’s dialogue itself is so lively and fun (the actual words the characters say). I wish he’d just let that shine. I get that this isn’t a ‘literary’ novel and we’re really here for the plot and the story, but I felt this was an oversight and an easy fix!

So overall, this wasn’t the book for me, although it was a fun and fast-paced read. I’ve realized that the historical novels I love best are ones that seems to have a genuine affection for, and enjoyment of, the time period. This one didn’t seem to have that.

As a reader, I can forgive little inaccurate details (God knows, I’ve probably got plenty of them in my writing too!!) if I feel that overall affection for the time. I didn’t feel that here. From the 19th century style detective, to the lack of historical details – I felt that Turton wasn’t excited about the period. That, combined, with the dialogue issues (which were throughout the book) made it a bit of a disappointment for me.

It should also be noted that I’m not a big reader of mystery novels in general, so I can’t say how this stacks up against modern, or classic, mysteries: perhaps Turton is one of the best mystery writers around these days! I don’t know. But he says himself in the back of the book that ‘I don’t like pinning a genre to my stories’, and I simply read it as a novel. As a novel, it didn’t float my boat (he he boat pun!).

I’m of two minds if I’ll pick up his first book – The Seven Deaths of Evelyn Hardcastle – which is another unusual murder mystery, set in a grand English home, and is currently being made into a film. Devil was fun enough that I just might pick that one up too, and give it a try! Maybe I’ll enjoy it more.

Does the book sound like something you’d pick up? Or have you already read it?

How much does ‘historical accuracy’ matter to you, as a reader, when going into a book set in the past? A little? A lot? Not at all? Depends on the book?

And what are your favorite murder mysteries of all time – Holmes? Agatha Christie? Something more modern? I’d love to know!

PS Today’s featured image is from the book itself, a beautiful artistic rendering of the imagined ship that the characters are traveling on.

‘Madeira Mondays’ is a series of blog posts exploring 18th century history and historical fiction. Follow the blog for a new post every other Monday and thanks for reading!

14 thoughts on “Madeira Mondays: The Devil and the Dark Water by Stuart Turton (Book Review)”