Heads will roll. – The tagline for Tim Burton’s Sleepy Hollow

Last Halloween, I rewatched Beetlejuice (1988) directed by Tim Burton. It was zany, silly, macabre, but also quite a smart satire of ‘yuppie’ culture and a celebration of the quirky and bizarre in all of us. It was colorful and strange and (especially for the time) unique. Plus there are some simply iconic scenes in it.

I think that Beetlejuice is really an example of Burton at his best. By contrast, with 1999’s Sleepy Hollow staring Johnny Depp and Christina Ricci, we have Burton at his most…bleh. 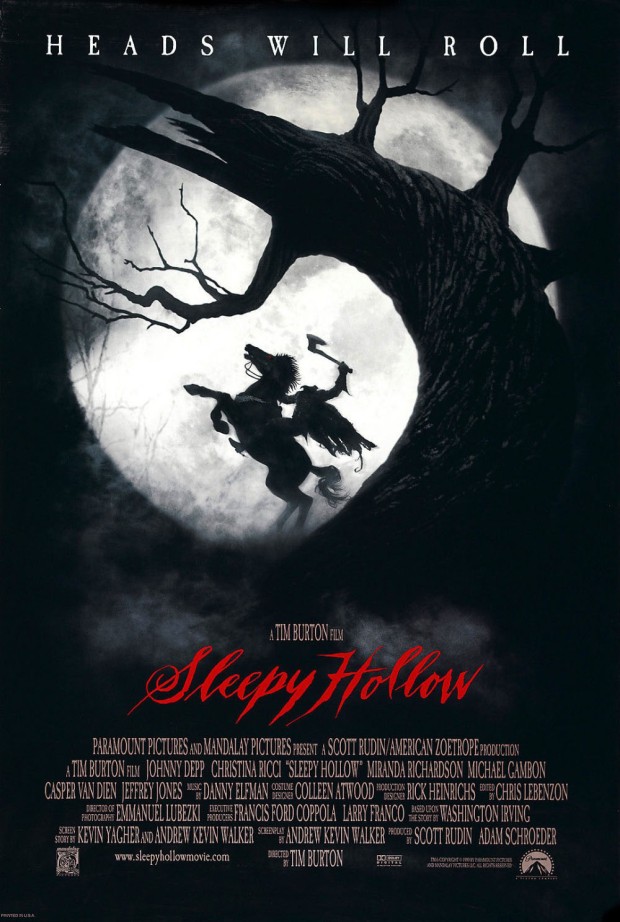 I choose Sleepy Hollow as my Halloween viewing this year because I had recently read the source material: The Legend of Sleepy Hollow by Washington Irving. For anyone who hasn’t checked out my Madeira Mondays post about it, I look at the history of Irving’s tale, published in 1820.

Irving’s original story is actually a bit like Beetlejuice (a quirky satire of the contemporary society that Irving was living in), and I think it has more in common, in terms of tone, with Beetlejuice than with the straightforward, semi-serious gothic Sleepy Hollow movie. The original Sleepy Hollow story is spooky at times, yes, but it’s overall pretty lighthearted and (in my opinion) a bit of a joke. It’s not gory, like this movie, and it’s frankly a lot more fun to read than this was to watch.

When I turned off Sleepy Hollow, after an hour and forty odd minutes of periodic boredom (with a pick-up of pace towards the end), I was left with a very ‘meh’ feeling about the whole film. I was also left with two main questions: 1 – Does it work as an adaptation? 2 – Does it work as a film in its own right? 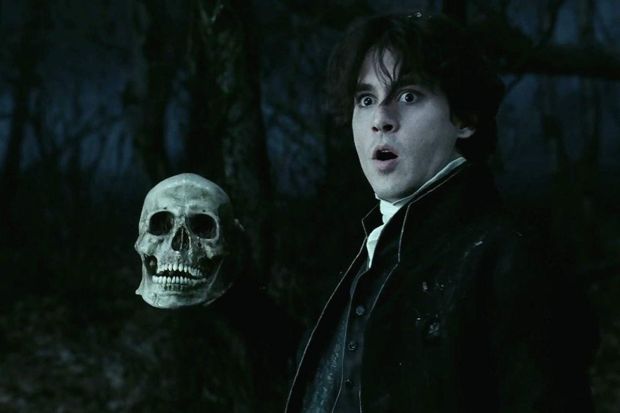 Does it work as an adaptation?

I often listen to The Flop House podcast (which is about ‘bad movies’) and recently they were discussing what makes a good adaptation. I can’t remember which host was saying this (perhaps Dan McCoy?) but he said that a ‘good’ adaptation is one where the creator figures out what it is they like about the original and then tries to explore than in a new medium. I really like this concept. It’s not about getting every single plot detail ‘right’, because film will have different demands than a book and vice versa, but rather figuring out what quality or aspect of a thing you really like, and then trying to translate that. (So maybe, for Lord of the Rings, it’s the epic sense of adventure you want to preserve? Or, with a Harry Potter book to film, it might be a feeling of cozy whimsy, or a focus on the coming of age narrative etc.)

I think, here, Burton and company picked out ‘spooky tale about Halloween hauntings’ from The Legend of Sleepy Hollow and really leaned into that, without examining what the original Sleepy Hollow is really about. I would argue that the original story  is mostly about superstition, how you shouldn’t believe everything you hear, etc. It’s also a little bit about inheritance and the film does lean into that – it’s not giving too much away to say that the film’s plot, like so many ghost stories, does involve an inheritance.

But the decision to reimagine Ichabod Crane (Johnny Depp) as a proto-Sherlock Holmes detective here, who packs his steam-punk goggles to go and investigate murders committed by the ‘headless horseman’ in Sleepy Hollow is such a strange choice (Ichabod Crane, in the original story, is a superstitious man and his fears are exploited by others in the town). This Sherlock Holmes rational/clues-driven detective stuff is also so Victorian to me that it feels out of place in the Colonial American setting, and is totally different from the book – although perhaps they didn’t want a lead who was a foolish as Crane from the story?

All in all, it’s not a particularly ‘faithful’ adaptation (in terms of themes, plot, character etc.), nor is it one that subverts/challenges/reimagines the original in any way. It just took the bare bones of the story and ran with that. Which, you could argue, is fine…but I didn’t like where they ran.

Does it work as a film?

If we put the source aside, it’s a decent film in its own right and it overall looks very good. Everything is muted, grey and black, and it would be a good thing to put on in the background when you’re carving pumpkins or something, because it does have a lot of spooky imagery: gnarled trees, glinting Jack-o-lanterns, etc. Knowing what Burton can do though, I think he could have pushed the mis-en-scene (all the bits on screen like set, costumes, props etc.) even further and made everything look stranger.

Also, and this is a pretty specific critique, the costumes look way more 1770’s and 1780’s to me than 1799 (when the film is set)…by this time, people were wearing more empire waist dresses and there is nary an empire waist dress to be seen! But maybe the town of Sleepy Hollow, being so remote, is a bit behind, fashion wise…

Finally, be warned that it is a little gorier than I expected, but I am a bit of a baby when it comes to horror movies (I never watch them). This one wasn’t ‘scary’ at all, but there was some blood and guts, so if that’s not your thing then I’d give it a miss. (Although the tagline did promise that ‘heads will roll’ and boy, did they ever!)

That’s about all I have to say about Tim Burton’s Sleepy Hollow, my Monday friends! A very decent film, but nothing exceptional!

What do you think of Sleepy Hollow?

What do you think makes a ‘good’ or ‘bad’ adaptation? Do you have a favorite book to film adaptation?

I hope you had a nice Halloween on Saturday, if you’re into that sort of thing (which, as you know, I am!).

(Also, since tomorrow is the US Presidential election, I wanted to send a gentle (yet urgent!!) reminder to all of my American readers to: VOTE. If you’ve not already…VOTE!!)