There’s a misty moor in the Scottish Highlands where, over 250 years ago, a battle took place that shaped the course of world history forever. I’m talking about Culloden, the site where Jacobite forces clashed with British government troops in a harrowing fight and one that would ultimately mark the end of the 1745 Jacobite Rising and the dissolution of the Scottish clan system. It was also, interestingly, the last battle fought on British soil.

When you go to visit Culloden yourself, there are ultimately two key elements to see: the battlefield itself and a shiny new visitor center, which explains the lead up to the battle, how the fighting went down, and also the legacy of Culloden. I have to admit, when we went to see this site two weeks ago, I knew very little about the battle, or anything leading up to it. Even though the 18th century is the time period I study, and even though I have to know about Scottish history to engage knowledgeably with guests in my volunteer job as tour guide at The Georgian House in Edinburgh, I didn’t know very much about Culloden in particular. I know more about 18th century social history and  the American Revolution (which took place about 30 years after Culloden).

So when I arrived to Culloden (which is overseen by the National Trust for Scotland, the same organization that runs The Georgian House – yay!), I was ready to learn. What I did not expect was quite how atmospheric it would be. On the morning we arrived, the fog was thick and the grass still slick from a storm that had passed the night before. The air was gray but the green field littered with bursts of purple heather. It was quiet, solemn and verging on spooky.

Our group split up and while my partner and my friend explored the battlefield itself, I went into the Visitor Centre (which is basically like a small museum, although there’s also a gift shop and cafe). We all wanted to go inside the museum portion, but we’d waited until the night before to book slots and could only get one, which my group graciously let me have (as the resident 18th century enthusiast). I also got in for free as a National Trust volunteer, which was a nice perk.

The museum is set up more or less chronologically, so that you can go through it and see what happened before and during the Jacobite uprising, from both a Jacobite and ‘government’ perspective. Who were the Jacobites? They were a group of mostly Scottish people who believed that the Catholic Stuart family had a right to the British throne. The Jacobite army comprised a lot of Highland clansmen and it was led by Charles Edward Stuart, or ‘Bonnie Prince Charlie’. They had achieved some successes fighting British government troops before Culloden, but at Culloden they were roundly defeated by the Duke of Cumberland. Their rebellion was over.

The museum does a really fantastic job of explaining this complex time period and the battle itself. The building is quite somber and looks almost like a military fortress, which adds to this atmosphere of seriousness – after all, 1,600 men were killed in this battle (1,500 of them Jacobites). And, from what I learned, there was a lot of brutality in the aftermath of the battle too, when the government troops were searching for the fleeing, defeated Jacobites – killing, pillaging, etc. along the way. So it is a somber site. 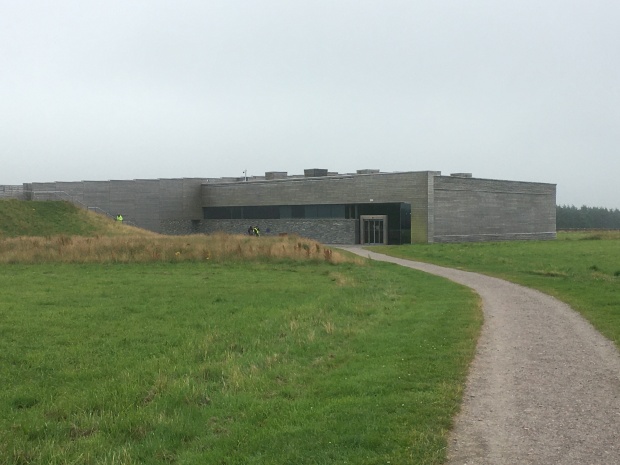 It’s a very engaging museum though and one of the elements that I liked most was the room where you could ‘immerse’ yourself in the battle itself. There were four screens, one on each wall, that featured re-enactors depicting the battle and it is quite immersive. To be in the middle of four screens, all full of heavily-armed dudes shouting, is overwhelming and does give a sense of the intensity of the fighting.

I also loved seeing the artifacts of the time. One disturbing item that stuck with me is a sampler from a young girl in a London. A ‘sampler’ was a piece of fabric where girls practiced their embroidery – maybe their ABCs, or they might sew images of a house or a bible quote or something. This girl had sewn a picture of a British redcoat stabbing a Jacobite soldier (I think the little girl had someone in her family who fought in the British army) and her caption was something like, ‘Killing the Highlanders!’ Apparently propaganda was rampant in London about how the ‘unruly’ highlanders in Scotland were rampaging and needed to be crushed etc., but there was something very sad about seeing this image on a little girl’s sampler, which is usually something full of benign images like birds, houses, trees.

Unfortunately, we didn’t have enough time for me to do a full exploration of the battlefield itself, but I was assured by the rest of my group that it was a fascinating sight. There are markers throughout about troop movements, flags marking where different army front lines were and where exactly the fighting took place. So it would be a particularly interesting sight for anyone who is keen on military history. There are also memorials too, for different clans that took part in the fighting. 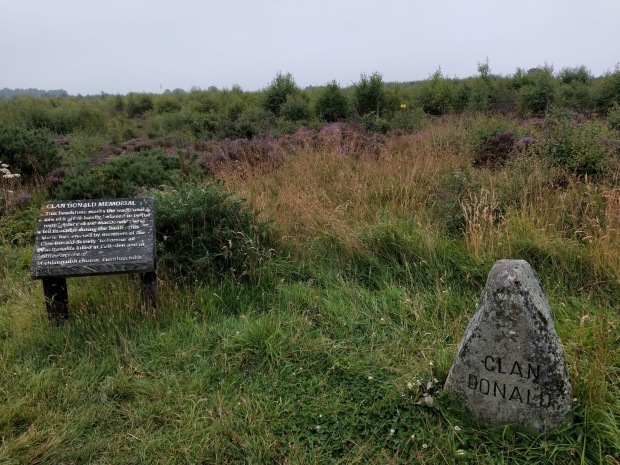 All in all I was very impressed with Culloden as a historical site and have pretty much nothing critical to say about it! The only bummer of our visit (the fact that we couldn’t all get into the museum) was very much our fault for not being more organized about booking the tickets – so anyone looking to visit, especially during Covid, do book your museum visit in advance online. It’s very easy to do.

I hope that was an interesting little jaunt into Scotland’s past. I would highly recommend a visit if/when you’re ever in the area. Like the Highland Folk Museum featured in my last post, I think Culloden has a special significance to fans of Outlander (which I’ve never read, but have seen a couple of episodes of!), but it would be an interesting place to visit even if you don’t know anything about Scottish history and if you have no connection to Diana Gabaldon’s sweeping time-travel romance series. It’s a carefully created and even-handed museum, and a striking Scottish geographical landmark. Let me know if you do visit, or have visited before, and what you thought about it – I’d be curious to know!

5 thoughts on “Madeira Mondays: A Vist to Culloden Battlefield”