Several years ago, I went to visit a friend of mine who lived in London. I got off the train at Liverpool Street station and set off to find her flat amidst the many pubs and red brick buildings crowded around Spitalfields market. I was surprised to see a tour group, led by someone in a top hat and cane. Then a second tour group walked by. Why were there so many tours? Then I was handed a flyer and it all became clear: Jack the Ripper tour. This area was the site of the infamous White Chapel murders, back in the 1880’s.

The Police News from October 20, 1888, featuring the death of Elizabeth Stride (one of Jack the Ripper’s victims). The Illustrated Police News was an early British tabloid. Image accessed via the Wikimedia Commons.

You probably know this already, but for any who might not: in Victorian London there was a string of five brutal killings in the East End by a man whose identity is still unknown today. Jack the Ripper.

I didn’t end up going on any of these tours, however, and I found the whole idea of a Jack the Ripper tourism industry a little disquieting. I still do. Are we mythologizing and, in a way, celebrating this evil guy who butchered women?

I do understand the gothic Victorian allure of an unknown serial killer though and I totally get why people would be curious to learn more about the murders. But, even though I’m interested in history (as you know if you read this blog!) and especially 18th and 19th century history, I’m not a big fan of ‘true crime’ and I’ve never had any interest in learning more about the Jack the Ripper killings. That is: until I heard about Hallie Rubenhold’s book The Five: The Untold Lives of the Women Killed by Jack the Ripper. 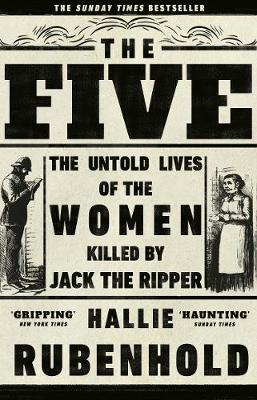 This book is not about the grizzly details of the murders and it is not about Jack the Ripper at all. It’s about the five women whose lives were lost. What starts as a case study of their five lives, emerges as a fascinating social history of working class Victorian London itself. It is also an attempt to restore the humanity of five people who have been dismissed for a hundred and fifty years as ‘just prostitutes’ (By the way, Rubenhold’s research reveals that the majority of them were not sex workers at all).

It’s a fascinating and heart-breaking non-fiction account of how five very different women came to find themselves impoverished and vulnerable to attack. We follow the five victims – Polly, Annie, Elizabeth, Kate and Mary Jane – who each get their own sections of the book. What becomes clear over the course of The Five is how precarious life was for working class women at the time. Many of them start out in relatively safe and stable situations, but through one or two twists of fate, find their fortunes reversed. While they were not all prostitutes, what Rubenhold does highlight is the fact that they were all alone when they were killed and sleeping outside. They were homeless. Throughout the book, Rubenhold reveals just how challenging their lives were:

The cards were stacked against Polly, Annie, Elizabeth, Kate and Mary Jane from the day of their births. They began their lives in deficit. Not only were most of them born into working class families, but they were born female. Before they had even spoken their first words, they were regarded as less important than their brothers, and more of a burden on the world than their wealthier female counterparts. Their worth was compromised before they had even begun to prove it.

This book has been very hyped, but I think it lives up to the praise and popularity it has garnered. The research is detailed and it’s very well-written. And I agree with its mission of focusing on the forgotten lives of these women, tragically cut short by a brutal murderer. As this review in The Guardian points out: ‘Forests have been felled in the interests of unmasking the murderer, but until now no one has bothered to discover the identity of his victims.’ It is, quite frankly, appalling that it has taken us this long to bother looking into these women’s lives.

The Five is literally dedicated to the women who were killed by Jack the Ripper, but it’s figuratively dedicated to them as well. Dedicated to piecing together portraits of their lives and characters, dedicated to revealing how dangerous and unstable life was for London’s working poor, and dedicated to reminding the modern reader that no woman is deserving of violence. I was really impressed with it as a project and as an act of historical research, so I hope you’ll excuse the fact that it is technically about 19th century history (not 18th, like we would typically focus on for ‘Madeira Mondays’!). I was compelled to tell you about it, and hope that you will find it similarly interesting.

Let me know if you’ve heard of The Five in the comments below and if it sounds like something you might want to read! Next Monday, we’re going inside an 18th century home. I’ll be starting a string of ‘Madeira Mondays’ focused on different rooms in a Georgian household and what went on in each one: bedroom, parlor, kitchen etc.!

5 thoughts on “Madeira Mondays: The Five by Hallie Rubenhold review”