I’m not going to lie: February is usually one of my least favorite months of the year. By the time February rolls around, I’m sick of cold and darkness, aching for sunlight and spring. I love snuggling up indoors in the winter – don’t get me wrong – but even a cold-weather girl like me needs sunlight every now and then. This year, with all of this surprising snow here in Edinburgh, it has felt like a very long winter indeed and I was so ready for March and the beginning of spring, which it seems, has finally arrived!

I was in such a bad mood by the end of this February, having barely left my desk for the entire month – editing my novel, editing another project, applying for things. It was productive, but it was also a little glum. I bit off way more than I could chew in February and didn’t make enough time for seeing friends. I often worked straight through the cold and dreary weekends, without taking a day off. My anxiety started getting really bad towards the end of the month as I grew more and more exhausted from all the work. It wasn’t sustainable and I had to make a change. So, I sat down with myself and made a list of things that I could do to improve my general well-being, mental health and happiness, so I don’t fall easily into that rut again. These ‘happy things’ included having stricter ‘work time’ and ‘off time’ and also making more time to go to the gym, which really helps me to relax.

I think that meditation, which I do almost every day, has been really helpful for me in getting through this stressful period, as I near the end of my PhD. I use an app called Headspace and also there’s The Honest Guys YouTube channel if I want more guided meditations. Taking myself to the cinema has also been a nice way to detach from work, as well as meeting up with friends and getting out of my head a bit.

Perhaps because of these positive changes, but also because of the change in weather, March definitely proved a lot more fun than February and also I’m excited about some things that are coming up. But let’s first look back at what I got up to in these last few months.

It’s a bit tricky to talk about my work at the moment because I don’t want to talk too much about things until they are done, but I can tell you that I’ve finished editing the second draft of my novel manuscript, which I’m calling (working title!): Between the Devil and the Deep Sea. I’m about to start work on the third draft. I’m also working on some essays about writing historical fiction and how I did research for this novel. These essays will form part (about 20,000 words) of my final PhD submission.

I also finished a final draft of another full-length book and sent it to a contest. I can’t say yet what that project is, but hopefully I’ll be able to tell you more about it in the upcoming months/year.

But enough of the mystery and intrigue! Here’s what I CAN tell you more about.

I was delighted to be asked to be In-house Blogger once again for StAnza (alongside poet Katie Hale). StAnza is an annual international poetry festival held in St Andrews, Scotland, where I did my undergraduate degree. 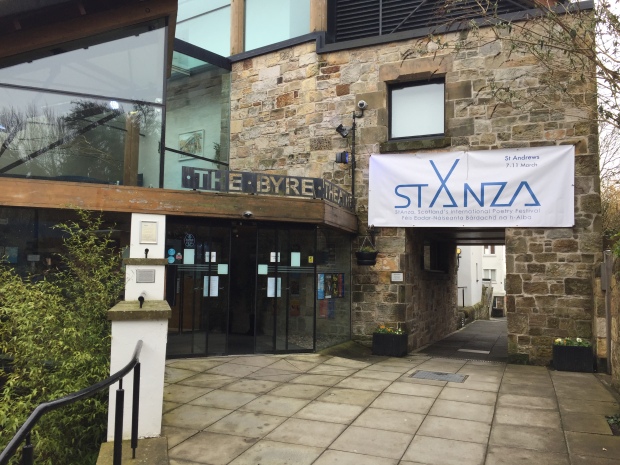 I wrote two blogs during my time there: one reflecting on ‘The Self’ in poetry (which was one of the themes of the festival) and the other about my experience judging the StAnza Poetry Slam.

In addition to blogging and slam judging, I also helped out with participants at the festival and introduced some events. This was my seventh year at StAnza (I started as a volunteer festival photographer and have gone on to volunteer in almost every capacity possible with this festival!). For me, is a great time to catch up with old friends, who I rarely get to see in addition to listening to some wonderful poetry .

And also I love wandering around St Andrews, which, as you know, I’ve got a lot of affection for. I wrote a whole picture book called I Love St Andrews, so…I kind of like the place a little.

Excitingly, in March I was also commended in a poetry prize run by the British Army: Writing Armistice. The contest was inspired by the centenary of the armistice ending WWI and they asked for entries responding to the theme of ‘armistice’ in any way. My poem which was commended, ‘Nothing of Floods’, is very personal and looks at the idea of armistice as it concerns arguments with family members.

The poem will be published in a pamphlet with the other winning entries and I was invited to read it at the National Army Museum in London, but unfortunately I’ll be away that weekend at a close friend’s wedding in Portugal. I’m sad to miss what I’m sure will be an amazing reading event (but I’m also looking forward to celebrating with my friend, in a vineyard outside of Lisbon, no less!).

As I mentioned, I went to the lovely St Andrews for StAnza and while I was busy most of the time with the festival, I had the opportunity to go for my favorite walk, along The Scores, by the castle ruins.

While in St Andrews, I also got to sign some (well, lots!) of copies of I Love St Andrews at the beautiful Toppings and Co. bookstore. The staff there are so nice and they made me a cup of tea while I made my way through these piles! I’m so happy that so many people are enjoying the book.

My cousin also visited me in mid-March. She’s a medieval historian and is doing some research in Belgium, so she was able to pop up to Scotland for a quick weekend trip. We ended up going to St Andrews for a day as well (it seems I can’t get enough of the place this spring!). We walked on the beach, through the rambling historic graveyard and of course paid a visit to Jannetta’s for some ice cream.

We also did some sightseeing here in Edinburgh too, including a walk up Calton Hill. I’ve never been before and was so impressed with the views out across the city on that bright, sunny day.

I’m also excited to announce that I’ve been accepted to be a panelist at a roundtable event at the annual Omohundro Institute of Early American History and Culture conference at the College of William and Mary in Virginia! The conference is in June and the panel discussion is called: ‘Creatively Writing about Early America and the Atlantic World: A roundtable on Fiction, Poetry and History’.

I’ll be joined on the panel by Deborah Harkness (University of Southern California), author of A Discovery of Witches, John Demos (Yale University), and my friend Chet’la Sebree. Chet’la is an incredible poet and we met when we were both fellows at the Robert H Smith International Centre for Jefferson Studies two years ago. It will be moderated by Jane Kamensky (Harvard University) and I’m incredibly thrilled to be taking part in what is sure to be a fascinating discussion about creative writing and American history.

What did you get up to in February and March? What are you reading and watching? Any upcoming trips planned for this spring?

Here’s to finding a better ‘work/life’ balance, as they say, in the upcoming months and to more afternoons spent eating ice cream and walking in the sunshine.