I watch The Great British Bake Off every year and this year I was especially looking forward to it – a bright spot of sweet, gentle television in what has been a particularly tumultuous year.

For any who might not be familiar, this is a popular British TV show where amateur bakers from across the UK ‘compete’ (I use this word loosely, because it’s quite a friendly show) to be crowned the winner. They make everything from breads to cakes to ice creams, and each week their skills are tested in a surprise ‘technical challenge’. For ‘the technical’ they all have to bake something, often historical, that they may not have ever heard of before. They are given only a sparse recipe and a set of ingredients. It’s meant to be a test of their general familiarity with all types of baking and also their overall baking instincts/skills.

This week, the ‘technical challenge’ was an 18th century dessert: ‘Sussex pond pudding’.

What is ‘Sussex pond pudding’?

The Bake Off hosts explained ‘Sussex pond’ like this:

‘Prue (the judge) has popped back to the 1700’s for this technical. She would like you each to make two Sussex pond puddings. Your puddings should be made with suet pastry and when steamed should be golden. When cut into your puddings should ooze out, creating a lemony, surup-y pond.’

The version of ‘Sussex pond’ that the bakers had to make on the show contained an entire lemon, in the center of the pudding, which is (according to my research) a modern addition to the recipe (historical versions don’t call for lemon).

A Sussex Pond pudding, photo via Wikipedia. (Sussex, by the way, for international readers, is a place in southern England, where I’ve never visited actually!)

While I hadn’t heard of ‘Sussex pond’ in particular, I did know that boiled puddings were all the rage in the 18th century. And when I say ‘pudding’, American readers might be picturing a custard-like substance that you might eat as a kid. No no no. In the modern UK ‘pudding’ refers to ‘desserts’ (i.e. ‘What’s for pudding?’ means ‘What’s for dessert?’) . And in this case we’re talking about a boiled/steamed pudding which is a traditional British type of ‘pudding’. (British readers, feel free to correct me if any of this is wrong! I’ve lived in the UK for ten years now and still sometimes get confused when I hear the word ‘pudding’ and picture American ‘pudding’!)

Jas Townsend talks all about the history of the word ‘pudding’ here in his video on how to make a ‘Boiled Plum Pudding’. He says that the word pudding is based on the Old English word for gut and stomach. And the original puddings were organ meats mixed with grains and cooked in stomachs or intestines. (If you’re familiar with haggis, that’s like an old ‘pudding’). These puddings were boiled for many hours in intestines, until the early 17th century when they started making them in cloth sacks, instead of intestines, and the meats were taken out.

Townsend also explains in that video that typical 18th century boiled puddings featured four key ingredients: flour, milk, eggs, fat (usually suet – more on that in the second). They are cooked by wrapping them in a cloth and boiling them (or steaming them)  in water. 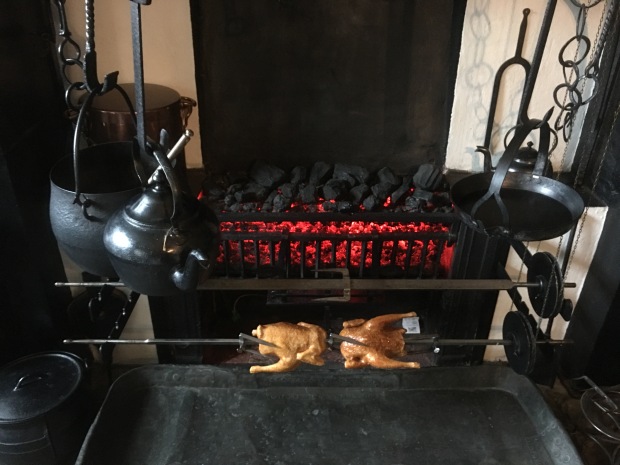 A recreated 18th century kitchen hearth, at The Georgian House in Edinburgh where I volunteer

On the Bake Off, many of the competitors were unfamiliar with one of the key ingredients of Sussex pond: suet.

As one of the bakers explained, the savvy Edinburgh lad Peter (who I’m rooting for to win!): ‘Suet is the lovely protective fat from animals that surrounds the livers, the kidneys.’

Townsend explains it in lots of detail in his video on suet and its many uses in 18th century cooking. He says that: ‘Suet is the fat from the loin and kidney region of beef and mutton.’ Apparently it’s a firmer sort of fat than the fat from other parts of an animal. I don’t eat meat, so even the look of suet kind of turns my stomach, but it was a real asset for 18th century bakers, and the modern bakers on the Bake Off were all given jars of it to use – I enjoyed their confused reactions!

In the end, most of the bakers didn’t nail the ‘technical challenge’, mostly because they didn’t steam their ‘Sussex ponds’ long enough. It makes sense. If you’re not familiar with historical recipes like this, you wouldn’t guess that it takes so long – like two hours – to steam. So the result was that many of them weren’t cooked!

I really enjoyed this episode of Bake Off (which is Series 4 – Episode 8 ‘Dessert Week’), but ‘Sussex pond’ is not something I’ll be trying to make any time soon. As those of you who have been reading this blog a while know, I enjoy making 18th century food and drinks from time to time – which sometimes goes well (see: ‘Switchel‘) and sometimes goes very badly (see: ‘Flip‘). But I think I’ll give this one a miss. I’ve tried these types of puddings before, and I’m not the biggest fan. But what do you think?

As one of the judges, celebrity baker Paul Hollywood, said during the episode: ‘Steamed puddings like this go so far back in British history, it was what we were known for.’ So they do have a rich history and you can give Prue Leith’s modern recipe a go here if you’re curious!

Have you ever heard of something called ‘burgoo’?

Nowadays the word ‘burgoo’ refers to a hearty, spicy stew, typically served in the American South with cornbread or muffins. However, in the 18th century, ‘burgoo’ referred to a type of oatmeal porridge eaten by British sailors!

I first learned about ‘burgoo’ in this video I stumbled across from one of my favorite YouTube channels: Townsends. For those who don’t know, this is a brilliant (and weirdly relaxing!) educational channel featuring a re-enactor Jon Townsend who cooks 18th century recipes. You might remember Townsends if you read my post about making ‘Flip’ from earlier this year!

One of the things that I love most about the channel  is how excited Townsend and his team get about 18th century primary sources. He frequently reads from letters and diaries of the time, and uses them as a little glimpse into the culinary past. In this video – ‘Sailor Rations in the 18th Century – Burgoo’, he reads aloud from Memoirs of a Seafaring Life: The Narrative of William Spavens. Spavens reflects on sailor’s rations (most of which consisted of beer, bread, beef…no fresh veggies and fruits, of course! No wonder they got scurvy from lack of Vitamin C!). Anyways, Spavens writes:

On Wednesdays we get burgoo boiled for breakfast and a pint of peas to make soup for dinner. On Mondays, no peas but burgoo for dinner.

So what was burgoo exactly? It’s majorly simple. It’s ground oatmeal boiled in water. Sometimes you got salted beef fat to go with it, or you might get molasses. Molasses, or black treacle (for British readers!) is a dark, sweet, viscous goo (seems like I’m using the word ‘goo’ a lot in this post!) which comes from refining sugarcane. On a ship, they’d be making it in giant vats, as Townsend explains. In his making of burgoo, he uses a ratio of 3:1 oatmeal to water.

After we watched this video, my partner (who eats porridge most days for breakfast) wanted to try his hand at making a ‘burgoo’, so we made it for breakfast, using the same simple method that Townsend did – adding hot water to oats. We put some molasses in too. Here’s the result, it’s not beautiful – but oatmeal isn’t a very photogenic food!

It was, predictably, a little bland.

We even added nutmeg (which Townsend suggests that officers might have had…but I’m a bit more wary of that. I don’t think that officers would have necessarily been eating burgoo at all, they might have had something nicer! And, even if they did have burgoo, they probably wouldn’t be grating nutmeg on it, unless they were a huge nutmeg lover and brought their own personal nutmeg stash with them to sea. Which, I guess, is possible. Nutmeg is delicious.) But even with nutmeg, it was bland.

In the end, I did a very un-period appropriate thing and cut up some banana to add to it, which sailor’s would definitely not have had! But I wanted to have a nice breakfast and the banana definitely was a game changer.

So that’s it! Burgoo is simple and warming and cheap (then and now). And it was fun to spice up breakfast with a bit of an 18th century inspired experiment. (We don’t really leave the house much these days, so gotta get those moments of entertainment where you can!)

What do you think of burgoo? Have you heard the word before? Does it seem like something you’d enjoy? Also, what breakfasts have you been enjoying recently in general? Granola with raisins and almonds is my go-to, but we’re going to try burgoo another time soon, possibly with more spices added to it!