I’m really into Christmas, which is usually a time for me to travel back to the USA to visit family and friends (although, alas, that cannot happen this year). But I’m also into the ritual of the holiday (and holidays in general) and using this time, every winter, to check in with myself and think about the year to come. And I think that’s especially pertinent this year, when it has been a pretty rough year globally (I think we can say!). It’s useful to reflect, right now, on where we’re coming from and moving towards.

I also love that Christmas traditions don’t just give an opportunity to connect with ourselves and our own family/friends, but also with other people who have celebrated the holiday (and more generally, this entire time of year) for centuries.

The drawing room of The Georgian House in Edinburgh, where I volunteer as a historical guide

The next couple of posts are going to be suitably Christmas/wintery themed (I hope that’s okay with everyone!), focusing on different traditions/recipes/things to do with the Georgian/Colonial period. The first one I wanted to mention was: The Yule Candle.

I mentioned yule candles in my post last year, Christmas in a Georgian Townhouse, which is a good general look at Christmas in the 18th century. If you’ve not read that one, definitely have a look for a broader sweep of Christmas traditions in this period.

Here’s what I wrote about Yule Candles last year, in that post:

One tradition practiced by many in this period was the Yule Candle. It was a big white candle lit by the head of the household at sunset on Christmas Eve and then allowed to burn throughout the night. It was believed to be bad luck if it burned out before Christmas morning. In Scotland, the Yule candle was not to be purchased, but given as a gift to the family and typically sat on the dining table where Christmas Eve dinner was eaten.

What I didn’t go into last time, was the deeper historical origins of The Yule Candle, and how it – like most of the 18th century Christmas traditions – had it roots in pagan traditions. As Kathryn Kane notes in her blog post on ‘The Yule Candle in the Regency’:

Yule was a pagan celebration around the winter solstice in which many peoples of Northern Europe had engaged for centuries, long before the birth of Christ. Because this was the time of year with the shortest days and the longest nights, much of the celebration was centered on fire, seen as substitute for the Sun (…)

Basically, pagan ‘Yule’ celebrations were all about fire – bonfires, burning logs. This celebration was calling light back into the world, during these really short, dark days. The Yule Candle was later co-opted and repurposed for Christian celebrations as a symbol of Christ, the ‘light of the world.’ And by the 18th century, the Georgians burned yule candles, yule logs, etc. to celebrate this Christian holiday and the whole festive season. (You can even hear mention of Yule logs in the famous Christmas song ‘Deck the Halls’ written in 1862. ‘See the blazing yule before us…fa la la la la…‘)

If you want to learn more about the ancient rituals of Yuletide, I’d suggest an absolutely beautiful picture book by Susan Cooper and illustrated by Carson Ellis: The Shortest Day.

It was published last year and it’s a lovely book about celebrations of the winter solstice and also how rituals connect us with previous generations. I loved the grey, wintery colors – which really reminded me of two Decembers ago, when I went to Sweden at Christmas time – contrasted with the warmth of the flickering fires and candles. It’s a perfect seasonal read.

From ‘The Shortest Day’

While I don’t think I’ll be lighting a Yule Candle this year, I do think it’s a very interesting tradition, and I’ll definitely be lighting candles generally! And enjoying their soft glow – welcoming back longer, brighter days into the world. 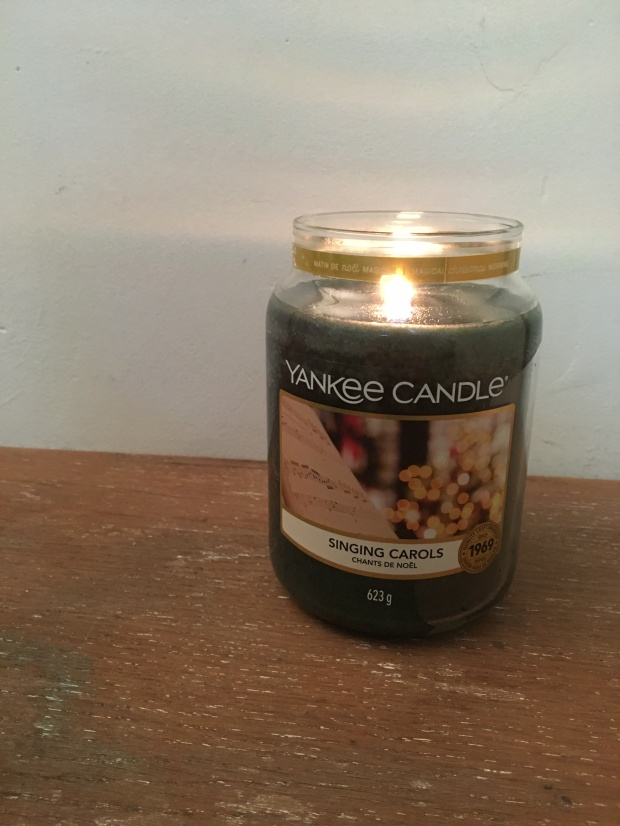