New Orleans is one of my favorite cities in the world to visit. Not only is it jam packed with delicious, flavorful food and music on every corner, there is also such a rich history there. Just have a stroll around the French Quarter and you’ll be able to see (and taste!) aspects of the many different cultures that shaped this unique city: Spanish, Afro-Caribbean, French, Anglo-American and Creole. It’s truly a one-of-a-kind place and I was lucky enough to go back there, for the first time in about ten years, for a family holiday this winter.

While we were there, I paid a visit to the Cabildo, a building that was once the colonial Spanish city hall but is now the home of the Louisiana State History Museum. 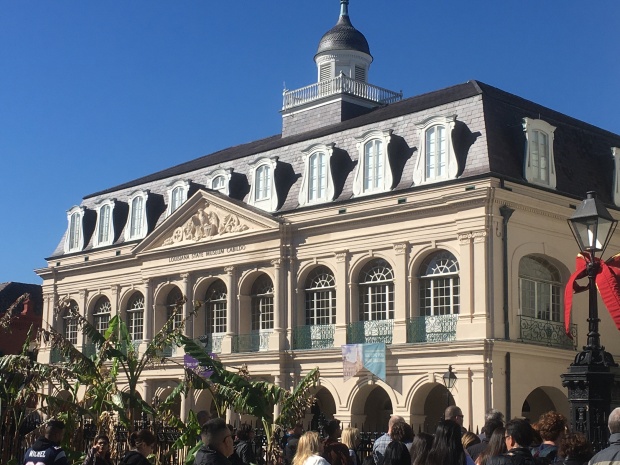 The Louisiana State Museum: The Cabildo

We went in for the afternoon and while there were lots of interesting things to see – including a whole exhibition on the battle of New Orleans during the War of 1812 and its memory in pop culture – the exhibition that really stuck with me was was called: Le Kèr Creole (The Creole Heart): Runaway Slaves, Music, and Memory in Louisiana.

The exhibition at The Cabildo

This is a multimedia exhibition featuring paintings, lithographs, and songs, alongside historical artifacts such as maps and period documents. It follows the story of a man called Juan San Malo, the leader of a runaway slave community in 1780s. But what really struck me was the format of the exhibition, which the museum describes as ‘a conversation between tradition and innovation.’ It’s part of an ongoing series apparently called In Dialogue, which features both traditional history documents (maps etc.) but also contemporary responses to those documents.

I liked this approach for several reasons. For one thing, men like Juan San Malo are usually left out of the traditional historical record. Even if we could find mention of him or runaway men like him, in perhaps letters, diaries, or newspaper ads from the time looking for runaway slaves, these documents would most likely have been authored by wealthy white landowning men, not by San Malo himself.

Also, San Malo was a Creole speaker. (Louisiana Creole was a francophone language created by enslaved Africans who lived on plantations in the region). By featuring many Creole songs in the exhibition, it tells San Malo’s story not only in his own language, but in a rare and endangered language of the area. The songs we hear are like an oral history of the region, an alternative history of New Orleans.

One of the striking pieces of art featured at the exhibition: Morning Mist in Colony Maron, by Francis X. Pavy, 2017. I am not a visual artist, so this description means little to me, but this piece is described as ‘augmented photographic lithophane in carved acrylic’. All I know is that lithophanes are backlit and several pieces like this were part of the exhibition. I liked the use of shadow, given how little we know about Juan San Malo.

One of the historical artifacts that I especially liked seeing was the ‘diatonic accordion.’ I learned that apparently German immigrants brought accordions to Louisiana and, in the early 20th century, the instrument was adopted by Creole and Cajun musicians.

Another striking feature of the exhibition was the large altar in the center of it, where you could place offerings or write in a book about ‘a dream of freedom’. This was a fitting element, considering that San Malo, who created one of the largest runaway slave settlements in North America and was eventually hung by Spanish officials, seems to be something of a folk hero and even a saint, who people memorialized and turned to for strength. Words from a Creole song ‘Ourra St. Malo’ (Dirge for San Malo) can be read on the walls nearby.

The altar in the center of the exhibition

One of the only things that I wished was different about the exhibition is that I wanted to know a bit more about the significance of the altar and how altars fit into Creole customs, because I know that Catholicism had a big influence in New Orleans (but maybe there was that information and I just missed it!). The only other thing that I wished was different was that I simply wanted more of the whole exhibition, as it was really just one room. But there is plenty to see in that room! I left feeling like I had learned something new about 18th century New Orleans and also with many ideas about how history can be communicated to the public, not just with maps and period documents, but with modern art and songs too. I thought about how this exhibition is not simply about one man’s life, but rather about the history of a language. A language which, in itself, IS history. Basically, it gave me a lot to think about! If you are in New Orleans, I would encourage a visit and do let me know what you think of it too.

‘Le Kèr Creole (The Creole Heart): Runaway Slaves, Music, and Memory in Louisiana’ runs until May 10, 2020 at The Cabildo.

Madeira Mondays is a series of blog posts exploring Early American history and historical fiction. I’m not a historian, but an author and poet who is endlessly fascinated by this time period. I am also currently writing/researching a novel set during the American Revolution and recently finished a Doctorate of Fine Art looking at how creative writers access America’s eighteenth-century past. Follow the blog for a new post every Monday and thanks for reading!