Do you know what it means to be a ‘dog in a doublet’? Or how you can become ‘The Admiral of the Narrow Seas’? If not – you’re not alone! These are obscure late 18th and early 19th century slang words that I discovered in Francis Grose’s 1811 Dictionary of the Vulgar Tongue!

So what is The Dictionary of the Vulgar Tongue?

The British Library explains it thus:

Francis Grose’s ‘Classical Dictionary of the Vulgar Tongue’ was first published in 1785, and is a dictionary of slang words. Grose was one of the first lexicographers to collect slang words from all corners of society, not just from the professional underworld of pickpockets and bandits.

The words in this ‘dictionary’ range from the obscene to the mild. Some are creative and colorful, some are nonsensical (to us and perhaps even to people at the time!). Some are derogatory and cruel (especially many of the words describing women) and some are kind of sweet. Many of the phrases in it have to do with men’s leisure activities (e.g. drinking and card playing) or they are about sex. But there are various terms to do with practical jokes, games and a whole host of other topics too.

I found this book an entertaining read and have picked out a few choice words to share with you! But you can also have a read through the entire thing yourself here! It’s definitely NOT a suitable read for children (these are swear words, after all!) but for the adults who want a glimpse behind the curtain of propriety into the rowdier reality of 18th century language and life, it’s worth a look! 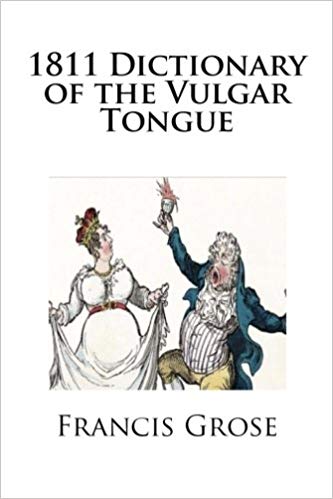 There were so many great words that I’ve had to split this up into several different posts, so these are my favorite slang words from The Dictionary of the Vulgar Tongue, Letters A through F! I’ve included a few of my own comments (in italics) as well, because I could not resist.

So how do you swear like an 18th century person? Read on…

ADMIRAL OF THE NARROW SEAS. one who from drunkenness vomits into the lap of the person sitting opposite him. SEA PHRASE.

AMBASSADOR. A trick to duck some ignorant fellow or landsman, frequently played on board ships in the warm latitudes. It is thus managed: A large tub is filled with water, and two stools placed on each side of it. Over the whole is thrown a tarpaulin, or old sail: this is kept tight by two persons, who are to represent the king and queen of a foreign country, and are seated on the stools. The person intended to be ducked plays the Ambassador, and after repeating a ridiculous speech dictated to him, is led in great form up to the throne, and seated between the king and queen, who rising suddenly as soon as he is seated, he falls backwards into the tub of water. (Something I learned from reading this book was that men at sea had a lot of time on their hands and loved playing tricks on each other. There were other sea games listed and they were all just as silly.)

TO AMUSE. To fling dust or snuff in the eyes of the person intended to be robbed; also to invent some plausible tale, to delude shop-keepers and others, thereby to put them off their guard.

ANKLE. A girl who is got with child, is said to have sprained her ankle.

APRIL FOOL. Any one imposed on, or sent on a bootless errand, on the first of April; which day it is the custom among the lower people, children, and servants, by dropping empty papers carefully doubled up, sending persons on absurd messages, and such like contrivances, to impose on every one they can, and then to salute them with the title of April Fool. This is also practised in Scotland under the title of Hunting the Gowke. (So they had April Fools’ Day!)

BEDFORDSHIRE. I am for Bedfordshire, i.e. for going to bed. (This one was perhaps my favorite phrase I encountered. I am going to start saying this.)

CAT CALL. A kind of whistle, chiefly used at theatres, to interrupt the actors, and damn a new piece. It derives its name from one of its sounds, which greatly resembles the modulation of an intriguing boar cat. (So this word was already around, but its meaning has shifted in the last few centuries. Also, what is an ‘intriguing boar cat’?)

DEVIL DRAWER. A miserable painter. (How often was this used?)

DOG IN A DOUBLET. A daring, resolute fellow. In Germany and Flanders the boldest dogs used to hunt the boar, having a kind of buff doublet buttoned on their bodies, Rubens has represented several so equipped, so has Sneyders.

DOODLE. A silly fellow, or noodle. (More on this word in a later blog post about the history of the song ‘Yankee Doodle’.)

FIRING A GUN. Introducing a story by head and shoulders. A man wanting to tell a particular story, said to the company, ‘Hark! did you not hear a gun?—but now we are talking of a gun, I will tell you the story of one.’ (I love that there used to be a phrase for this, when someone brings up a topic only so that they can talk about it more e.g. ‘Did I smell food? Speaking of food, when are we going to have dinner?’)

I hope that you enjoyed these antiquated slang words, and let me know if you manage to squeeze any of them into conversation! Be on the lookout for the next round of ‘vulgar’ phrases in a future post.

Madeira Mondays is a series of blog posts exploring Early American history and historical fiction. I’m not a historian, but an author and poet who is endlessly fascinated by this time period. I am also currently writing/researching a novel set during the American Revolution and recently finished a Doctorate of Fine Art looking at how creative writers access America’s eighteenth-century past. Follow the blog for a new post every Monday and thanks for reading!